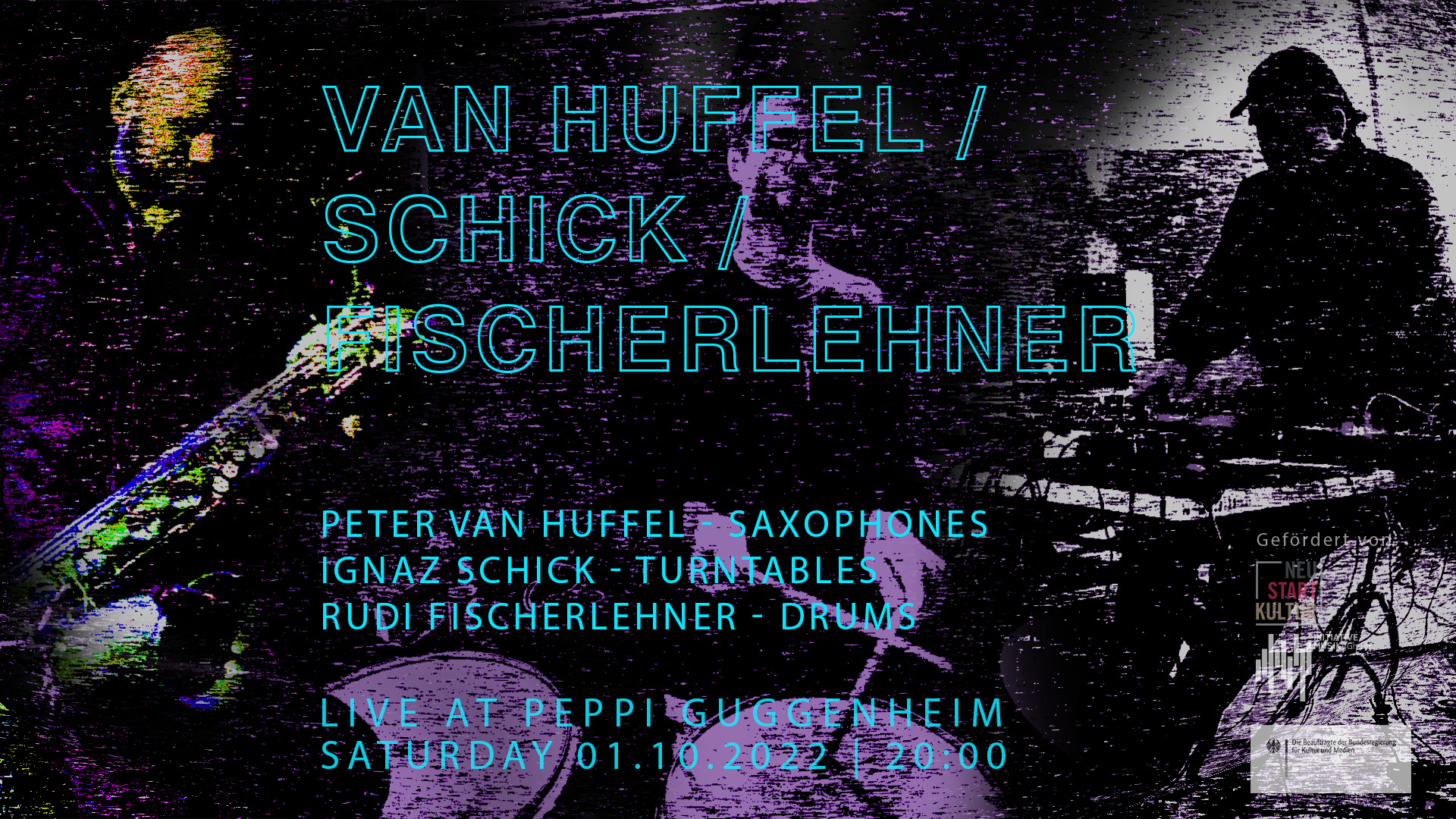 A first meeting of a new trio consisting of three unique and individual improvisers: this will be an evening of spontaneous and exploratory music creation with Peter Van Huffel on saxophones, Ignaz Schick on Turntables and electronics and Rudi Fischerlehner on drums. Although Van Huffel and Fischerlehner have worked for years together in the punk-jazz trio Gorilla Mask, this first encounter in trio with Schick promises a new and exciting turn in their collaboration.

PETER VAN HUFFEL has played an active role in many of the world’s top jazz scenes with numerous tours across Europe, the US and his native Canada. He is the leader of the punk-jazz trio GORILLA MASK, which has released five albums since 2012 including four on the renowned Portuguese label, Clean Feed Records. He has released an additional ten albums as leader and collaborator on a variety of labels and been featured as a guest or sideman a number of recordings by a variety of artists. Peter’s newest group, Callisto, will be recording in October 2022 and in addition he is currently developing a solo project for saxophone and electronics. He has resided in Berlin, Germany since 2008.
petervanhuffel.com

Rudi Fischerlehner lives in Berlin and plays drums in various different musical projects that fall between improvised and experimental music, jazz and post-rock. He also composes and produces music for bands, film and performances. His current projects include the drum solo project 15 8 SLUM, Xenofox with Olaf Rupp, Der Dritte Stand with Matthias Müller and Matthias Bauer, and Ohlmeier / Khroustaliov / Fischerlehner. He also plays or has played with Gorilla Mask, the Julie Sassoon Quartet, Fiium Shaarrk, Tonia Reeh, Tristan Honsinger, Matthias Schubert, Mia Dyberg, Joke Lanz, Zsolt Sőrés, Erste Stufe Haifisch, the Sound 8 Orchestra and many more. As a producer and composer for film soundtracks he contributed to movies by Ella Raidel, Johanna Kirsch and Katharina Lampert and was involved in the art, video or performance work of Wilhelm Groener, Alterazioni Video and Katrin Plavcak among others.
http://www.rudifischerlehner.net

Eintritt frei – um angemessenen Kulturbeitrag wird gebeten.
Free entry – it is suggested to give some money if you like the band.