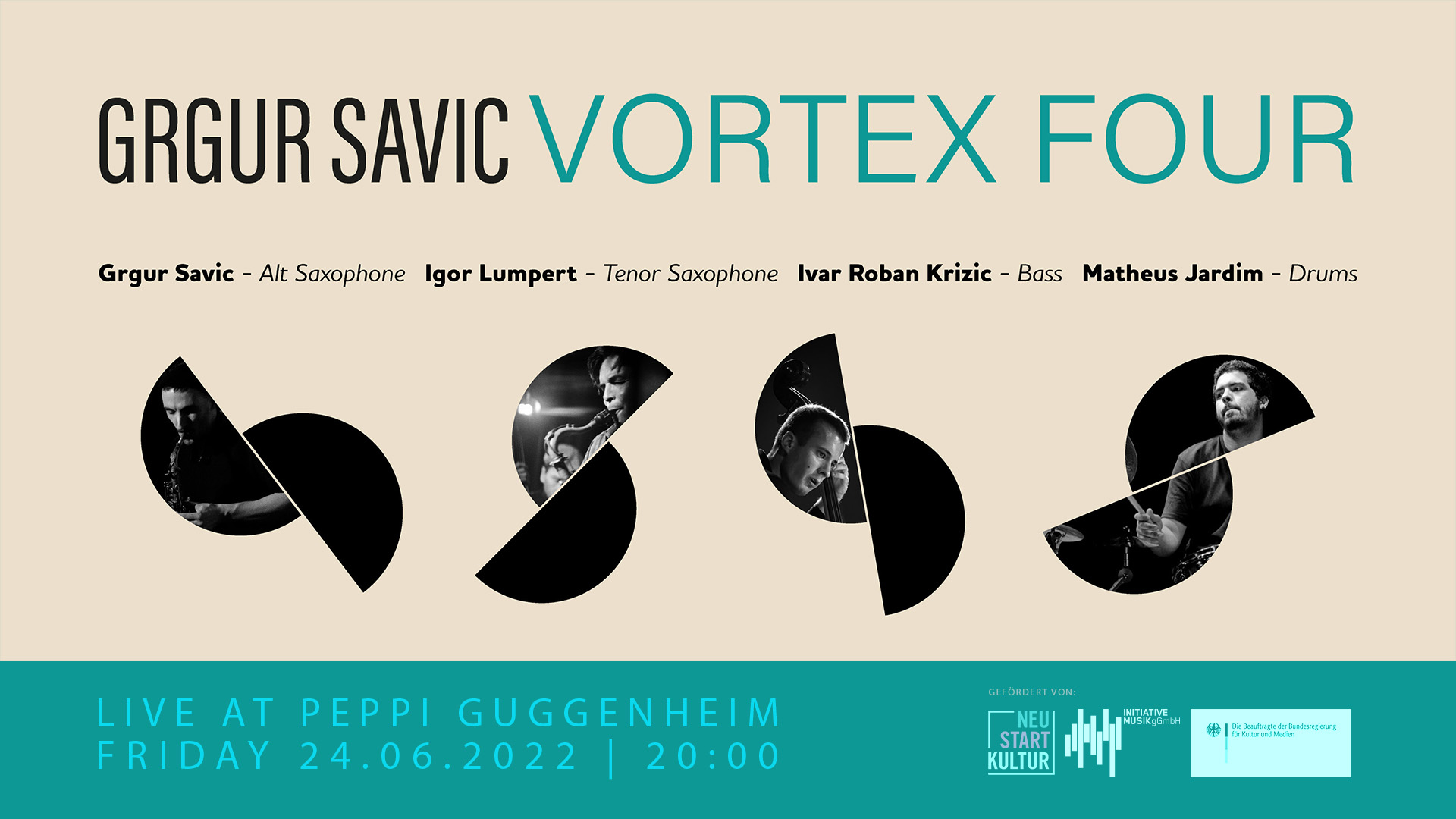 GRGUR SAVIC is saxophonist and composer based in Berlin since 2015.

Widely associated with his main projects: PITCH SHIFTING, SPACE TIGERS BERLIN, THE FORM and his newest GRGUR SAVIC VORTEX FOUR embracing the freedom, melodic power, harmonious joy and spirit performing his original compositions. Past musical projects include Mangroove, an experimental fusion, Free Willys, conceptual free music trio, Tub Force – post bop/fusion. Grgur’s music is available through the CD-s he has recorded, Youtube and others. In between recording and playing shows, Grgur is self studying on making short documentaries and movies which are involved in major of his music videos.

IGOR LUMPERT is tenor saxophonist and composer based in New York since 2000. He began his professional training at age 19 at the Bruckner Conservatory in Linz, Austria, where he studied with Doug Hammond and Harry Sokal. During this period, he was a member of Munich-based band Sidewinders, winner of the „Best Jazz Group of Germany“ award. After completing his studies with honors, Lumpert was invited by one of the world’s finest bassists, Reggie Workman, to study at the New School University in New York City. He received a scholarship and moved to New York in fall 2000. Lumpert’s music represents a unique fusion of jazz, funk, Eastern European rhythms, and modern neo-bop sketches. He has performed with jazz legends including Reggie Workman, John Abercrombie, Chico Hamilton, Sonny Simmons, Boris Kozlov, and Andy McKee. Lumpert has performed at jazz festivals in Munich, Ljubljana, Novi Sad, the Cankar Centre in Ljubljana, at major jazz clubs in New York including the Jazz Standard, Cornelia Street Cafe, Supper Club, and Birdland and venues in Vienna, Munich, Linz, Zagreb, Belgrade, Sarajevo, Novi Sad, Athens, Crete, Venice, and Hungary.

IVAR ROBAN KRIZIC is a double bass player and composer based in Vienna, Austria. He is doing an artistic research doctorate on freely improvised music at the University of Music and Performing Arts. In the summer of 2020 he recorded his first album „Sound“. The CD is dedicated to the research of new sound productions, the practices of freely improvised music, as well as the interpersonal relationships that affect the spontaneous expression of music. Momentan he is presenting the album for the first time in Croatia this winter followed by other European countries. He will be accompanied musically by the following Austrian musicians: Gerald Preinfalk (professor for classical saxophone at the University of Music and Performing Arts Graz), Peter Herbert (professor for double bass at the Anton Bruckner University in Linz) and Nikola Vuković (graduate of the Jazz Academy at the University of Music and Performing Arts Graz).

MATHEUS JARDIM is a Brazilian drummer residing and living in Vienna, Austria. The young music star in his short career has had the privilege to perform and play with most of the revered jazz names on the European and World music scene. Matheus has performed with artist such as Will Vinson, Alex Spiagin, Gabriel Grossi, Alex Core, Joander Cruz, Erik Asatrian, Michael Acker, Gerald Preinfalk, Georg Vogel, Fagner Wesley, Jo Jo Lackner, Mopedloewen and many many more…

Eintritt frei – um angemessenen Kulturbeitrag wird gebeten.
Free entry – it is suggested to give some money if you like the band.